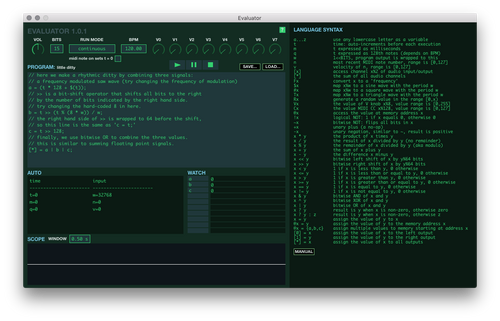 This version addresses a couple bugs and introduces a couple new language features, which are summarized below.

The conditional operator (a ? b : c) is now implemented with branching so that only one of the two expressions are evaluated based on the first operand. This means that it can be used as a simple if/else construct with side-effects. For example:

It is also possible to leave off the second branch, like so:

An array-like syntax has been added to make assigning values to consecutive memory locations a bit cleaner:

Each element of the list in braces can be a full expression. This syntax can also be used when assigning to the output:

Finally, another important change is that the plugin versions are now Instruments rather than Effects (ie VSTi, AUi, etc). This change was made to accommodate hosts that will not send MIDI to Effect plugins. If you have a project in one of these hosts and it is using the Effect version of the plugin, you will probably need to save out the settings as an fxp file before upgrading to this version. If you are using Reaper (and possibly others) you will not need to do this.

Here's the full list of changes for this update: